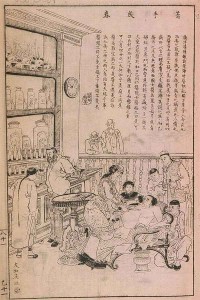 “Once upon a time, there was a woman doctor from one of the Western countries whose name was Li Ying. In the beginning, she was living here temporarily. Her major is gynecology but she has knowledge of surgery as well. A beautiful woman had a very big tumor. She went to the Hongkou Tongren Hospital (in a suburb of Shanghai). The Western woman doctor checked and said this tumor could be cured. Then she cut the tumor off with a sharp knife, and put some medicine on the cuts. The woman has fully recovered after one month. The tumor was very big—about one fourth of the human body. Where would this patient be if she had not met this Western doctor? And who would know of the wonderful skill of the doctor if she had not met this patient? It might be fate that brought them together.” Translation, courtesy of Zheng Jianping

The illustrations and charts on these web pages complement and supplement the book Accommodating the Chinese: The American Hospital in China, 1880-1920 by Michelle Renshaw. It is Published by Routledge, New York, London, 2005 ISBN: 0-415-97285-X (hardcover) The book is available from Amazon or Barnes and Noble